On Thursday 21st November 2019, VE Comp John Hanning was reinstalled as First Principal of Cromwell Coronation Royal Arch Chapter No 20 at Lodge Dunstan in Clyde, Central Otago. The installation was attended by member of the Grand Royal Arch Lodge, including RE Comp Phil Ivamy, Grand Haggai who had travelled quite some distance south to join us for the event. 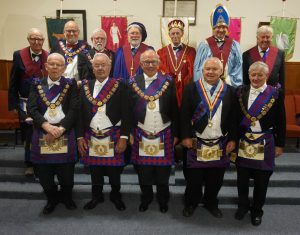