It’s surprising what lengths some Freemasons will go to help out their communities – in this case, the length of New Zealand. 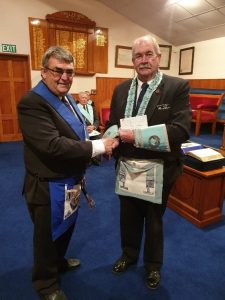 At a recent meeting of the Heretaunga Lodge No. 73, the Lodge presented a cheque for $1000.00 to John Glew, Past District Grand Director of Ceremonies. John and his wife Karyn were participating in the Pork Pie Charity Run from Kaitaia to Invercargill which was raising funds for KidsCan Charity.

A total of 60 Mini’s gathered in Kaitaia to carry on with two people’s vision to raise funds for a charity. This year was the 6th Pork Pie Charity Run. After six days, seven nights and over 2500 km’s over some of New Zealand’s best and worst roads 60 Mini’s arrived in Invercargill.

To enter, there is a registration process akin to the buying of mission tickets. Registration opened at noon on the 16th April 2018. In just 7 minutes, all 60 places were filled. Entry cost $2700 per team, and you also had to undertake to raise a minimum of $1000 for the named charity, KidsCan.

A total of just over $298,000.00 has been raised for disadvantaged children throughout New Zealand. This is done by providing them with essentials to enable them to learn. This includes items like food, socks, shoes, raincoats, as well as essential personal hygiene requirements. The Heretaunga Lodge No 73 contribution was earmarked for the KidsCan in schools Nitbuster programme and other items.

Then a long scenic route home to Havelock North.

This site uses Akismet to reduce spam. Learn how your comment data is processed.