‘… until time or circumstances shall restore the genuine’ 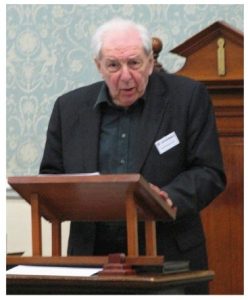 CryerIn this, the first of a series of articles that are to follow with this title, the purpose is to help us all to re-encounter phrases in our ritual that are so often and so easily repeated that we may not have realised the full content of what has been said. If ritual is to be of any true value then it is important for its complete meaning to be clear to us. The mere learning of words that have no apparent relevance for us is boring and pointless. If that is the case for some, then I can well understand why there are too many Masons today who question if the learning of ritual at all is really necessary. Some of us who have been in Free and Accepted Masonry a long time only claim to have enjoyed it so long because it has continued to reveal more and more of its treasures as we have pondered and unravelled the phrases we have so often repeated. lt is the continual discovery of new meanings that has kept our interest and helped us to both recite, and listen to, the ritual year after year.

It is against that background that I invite you to look again at the words in the Third Degree when, having been instructed in the Five Points of Fellowship, the Master informs us that these substituted signs shall mark us out as Master Masons ‘until time or circumstances shall restore the genuine ones’.

As so many Freemasons still do not complete their essential Masonic journey and therefore do not receive the genuine Master Mason secrets in the Holy Royal Arch, it should not surprise us if these words of the ritual pass by without making any impact whatsoever. If a Brother has been assured that the present Master Mason Degree is complete in itself, or that learning how to face death is all that matters, then who cares if there are ‘genuine secrets’ that remain unrevealed?

Yet that is not what the present Master Mason is told at the Opening of this Degree; an Opening, of course, that the Candidate will not have heard. He will learn soon enough, however, if he pays attention, that the purpose of this Degree is ‘To seek for that which is lost, which by your [the Master's] instruction, and our own endeavours, we hope TO FIND’. So, contrary to what others may tell us, the ritual makes plain that this Degree is not complete until we re-discover those ‘genuine secrets of a Master Mason’. And as if to hammer home this true purpose of the Third Degree the Opening ends with this promise from the Master: ‘Then, Brethren, we will assist you to REPAIR THAT loss…’. Nothing could be more clear than that. He is not saying here that he will help us to be satisfied with “substituted secrets”. He is promising that HE, with the additional knowledge and progress that he has as an Installed Brother, will be able to help us make the still further journey to the place where we can acquire the genuine Master Mason secrets. And that is exactly what is being said in the ritual phrase with which we began.

The word ‘until’ in that phrase meant that the substituted secrets were temporary ones which had to be replaced by the genuine. In order to secure these it is a matter of having reached the right TIME and that is when Moses’ Tabernacle in the Wilderness and Solomon’s Temple are joined by the Second Temple erected under the direction of another ]ewish Prince. That IS the right TIME because this was the moment foretold by later prophets in the Volume of the Sacred Law, for the completion of the sacred sites ordained by the Divine. There can be no better moment for an Accepted Freemason to commemorate than this one. A parallel with the building work of our operative forebears.

“lt is also the right CIRCUMSTANCE because this was the situation when Cyrus, King of Persia, released the Jews from exile and allowed them to recover their appointed homeland. It is on their own soil and with a sacred task to complete that we, their ritual successors, can rightly receive the genuine secrets of a true Master Mason. This is what ancient Masonry was meant to lead up to and then conclude with. Raised from a death in exile, enabled to construct the sacred edifice where the Divine presence met with his people in the Holy of Holies, we can experience the summum bonum, the ultimate Masonic goal. That is what the Master's Third Degree words were promising us. To know what Masonry is all about means entering the Royal Arch.”