On 16 January 2013 Auckland District lost one of its most recognizable characters, RE Comp Don Lowrie PGJ. A dedicated Royal Arch Mason his sense of humour and his willingness to debate with at any time was well known. 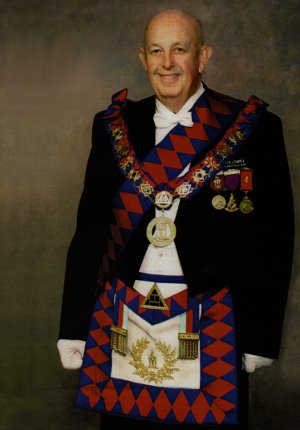 A father of two, with one grandchild, Don was an engineer by trade working first with New Zealand Railways and then later with Reid New Zealand Rubber Ltd, at Penrose, until its closure around 30 years ago. He subsequently worked as a contractor engineer. He continued his engineering activities into his retirement benefiting his neigbours fixing lawn mowers and building trailers.

He was a fisherman, a duck shooter and a pianist. Apparently not many knew this latter skill!

An active Freemason he was  member of Lodge Manurewa No 330 having transferred from The Manukau Lodge No 24; a member of the South Auckland Preceptory No 26 and the Knights Templar; and a membert of Franklin Chapter No 505 of the Ancient and Accepted Rite in which he attained the rank of 32°.

He was also a Past Thrice Illustrious Master of Unanimity Cryptic Council No 106.

And indication of the esteem in which Right Excellent Companion Lowrie was held was evidenced by the attendance at his funeral. Three Grand Masters (active and Past) — Selwyn Cooper, Barry McLaggan and David Mace — and three Past First Grand Principals — Arthur Wilson, Barry McLaggan and Rod Biel — were present in the company of over 80 Freemasons which included Past Grand Superintendents and other Officers and Grand Chapter and Companions and among which were representatives of other Orders inlcuding the Ancient and Accepted Rite, the Royal Order of Scotland and the Knights Templar. Around 120 people were in attendance for the service which was presided over by the Grand Chaplain, Ivan Smith.