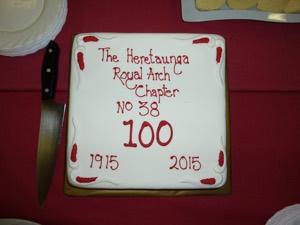 The centenary of Heretaunga Royal Arch Chapter No 38 in Hastings was celebrated in fine style on the weekend of June 5-6, and the Chapter is to be congratulated not only on achieving its centenary but on the weekend’s various events. Organiser R E Comp Nigel Petrie, who was well supported by his wife Sheryll and other family members, did an excellent job.

The Chapter worked a Royal Arch degree on Friday June 5, with candidate Paul Brittin, well-known in the area as a previous District Grand Master of the Ruahine District.

The highlight of Saturday events was the Rededication Ceremony, conducted by the First Grand Principal, ME Comp Geoff Davies. The Chapter was closed for the ceremony, enabling the presence of ladies and other non-Royal Arch visitors. The event included presentation of a magnificent Centenary Jewel to members, and the unexpected but well-received presentation of a First Grand Principal’s Award to Nigel Petrie, recognising his considerable contribution to Royal Arch Freemasonry at every level.

After the ceremony everyone adjourned to the refectory for high tea, the Toast to the Chapter, proposed by the First Principal, V E Comp John Peryer, and the cutting and consumption of a splendid birthday cake.

That concluded the Masonic components of the centenary celebrations, with the final event being a magnificent dinner at Vidal’s in St Aubyn St. Vidal’s is a superb venue and the meal was outstanding.

This was truly a standout event, and all members can be proud of the way the milestone was marked, and the way those who have gone before were honoured.

Geoff Davies GZ, who was born and raised in Hastings, said at the Heretaunga Chapter Rededication Ceremony that he was deeply  honoured to convey the congratulations of Grand Chapter to Heretaunga Chapter No 38 at its centenary celebrations.

“It is not just congratulations that I and the other Grand Chapter officers who have accompanied me bring to the Bay’s finest city of Hastings today. It is a very sincere, and humble, thank you for what you have done for Royal Arch Freemasonry in Hawke’s Bay.

“I say sincere to emphasise our gratitude for your efforts, both those who are here or still supporting the Chapter, and those who have passed on. I say humble because we are in awe of your achievement: perhaps the first few decades were easy in terms of a strong membership base but very few Chapters anywhere have had an easy time of it in recent years. Many have succumbed, and handed in their Charters.

“You have not. You have now turned 100. As they say today, that’s awesome. The Chapter’s achievement represents an untold level of commitment and love for Royal Arch Freemasonry from generations of members and those who have supported them at home. To that core group I add the other Hawke’s Bay Chapters who each in their own way have supported Royal Arch Freemasonry in Hastings over the years, starting obviously with Victoria Chapter No 4, the mother Chapter; and I salute the local Craft Lodges from whom we draw our members.

“It records that M E Comp A C Andrews, the First Grand Principal, performed the opening ceremonies on May 10 1915. There were 17 petitioners, and a total of 39 Companions in attendance representing 11 Chapters.

“Looking back from 2015, it’s amusing to read that there was some apprehension ‘for the fate of the mother Chapter, several of whose officers and most sedulous members would for the future give most of their energies to the new Chapter’. But Victoria seems to have survived the birth of Heretaunga quite well! Several of its sedulous members are investing their energies here today.

“2015 is of course also the centenary of Gallipoli, widely commemorated in New Zealand and on the world scene in recent months. A quick check of major events there around May 10, a date so close to April 25, seemed appropriate, and showed that 3rd Bn NZ Reinforcements arrived in theatre on May 6, the NZ Infantry Brigade was involved in a major battle on May 8 and the NZ Mounted Rifles arrived from Egypt on the 12th.

“Elsewhere the famous Cunard Line passenger ship Lusitania had been torpedoed by a U-boat near Ireland on May 7 with the loss of 1198 passengers and crew. There was a storm of protest, and on May 10 there were anti-German demonstrations in London and Liverpool. But back to Hastings. The opening of this Chapter also meant that there were now three Chapters at work in Hawke’s Bay, qualifying it to be a separate Royal Arch District with its own Grand Superintendent, thus ‘relieving the over-burdened Grand Superintendent of Wellington’.

“Speaking of the burden borne by Grand Superintendents, here’s another bit of the paper:

“‘One essential qualification for a Grand Superintendent of Hawke’s Bay is that he should be a doughty traveller, with time at his disposal to travel in. From Dannevirke to Gisborne is 226 miles. A car-sick GSupt would be a catastrophe impossible to contemplate.’

“I wonder if things have changed that much in that department, even though the District goes no further north than Wairoa!

“There must have been many high points for Heretaunga Chapter over the years but naturally there have also been some lows. Any Hawke’s Bay historical account covering the past century could not fail to mention the 1931 earthquake, in which 256 people were killed. This is commonly referred to as the Napier earthquake, and it is often overlooked that 93 of those poor people died here in Hastings.

“The Research paper records that the Chapter’s losses in the earthquake were ‘substantial’ (apart from the sufferings of individual members), and came on top of being burnt out in June 1929. Grand Chapter voted £250 for earthquake relief in Hawke’s Bay, and Heretaunga received a grant of 30 guineas from that, for rent and hall cleaning, and to cover two members’ dues. (Sadly Victoria was hit much harder – it lost ‘everything it possessed’ and their grant was 200 guineas.) The Chapter’s records and honours board in the foyer of this building contain the names of many eminent Freemasons in the area. Most of you will remember Roach’s Department Store on the corner of Heretaunga St and King St. The founding First Principal of this Chapter was George Roach, later Grand Superintendent 1925-26 and mayor of Hastings 1929-33. The third First Principal, J A Miller, had already served as mayor.“In 1943 S I ‘Jonah’ Jones was First Principal and he was later the National Party MP for Hastings (1949-54).

“As you would expect, several members of Heretaunga feature on the list of Grand Superintendents: in the footsteps of  Roach came J J Pickett, J H Wilkins, A K Johnston, A H Sivewright, R V Symonds, and happily here today, Raymond Arnold and Nigel Petrie – so far. I expect there will be more. Many other members have served Royal Arch Freemasonry well in other Grand Chapter positions.

“Speaking of members, Heretaunga has been quite the leader in membership terms at some points in its 100 years: in 1981, for example, it had 120 members, the largest in New Zealand by a margin of 12. Not bad! In a perfect world, one day this Chapter will again have 120 members, and so will all the others.

“Meanwhile, in closing, congratulations again, thank you for holding the banner of Royal Arch Freemasonry so high for so long in Hastings, and we wish you every success in the second century.” 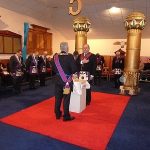 First Principal, VE Comp John Peryer, adopts the Obligation of Rededication, recited to him by ME Comp Geoff Davies GZ 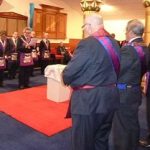 RE Comp Frank Vandenberg GJ delivers the reading in the South 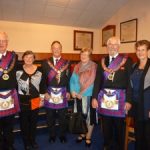 “Three such as we” Central Division Grand Superintendents and their ladies: Richard and Margaret Bray (Hawke’s Bay), Roger Gregory and Emily Wood (Ruapehu/Taranaki), and Ken and Irene McQueen (Wellington) 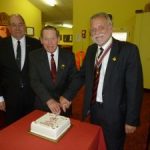 Geoff Davies GZ and the Chapter’s most senior PZ and Almoner, V E Comp Stan Robertson, cut the cake at the high tea in refectory after the ceremony. 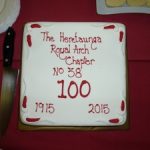