Canterbury Royal Arch District was very fortunate in having two nominees for the annual Royal Arch Scholarship Awards being successful in their application for the 2018 year.

Alice Cunningham and Isaac Williams, both from Waimate were the successful candidates.

Alice, who is studying for a New Zealand Diploma in Business and continuing further with a post graduate course for a National Certificate in Financial Advice was awarded $1200.00 and also received a further $1000.00 from the Fletcher Wilson Trust.

Isaac is studying for a Batchelor of Musical Arts at Ara Polytechnic in Christchurch and was awarded $1200.00 towards his support.

Both of these students were invited to attend the Canterbury Annual Royal Arch Luncheon in Ashburton on 26th August last, to formally receive their certificates (the Scholarship money had been sent to them prior) but Alice had been unable to attend however Isaac was present and displayed the virtuosity of his guitar playing ability to the delight and pleasure of all who attended the luncheon.

Alice was able to present herself at the installation meeting of Albert Edward Royal Arch Chapter No. 6, in Christchurch on 25th. September where our Grand Superintendent, REComp. Paul Johnston declared the Chapter “at ease” and invited Alice in to the Chapter Room where her certificate was duly presented and she suitably responded..

Overall a pleasure to see these young people making obvious effort to achieve a hopefully bright future for themselves. 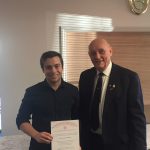 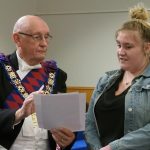