130 Years of The Grand Lodge of New Zealand 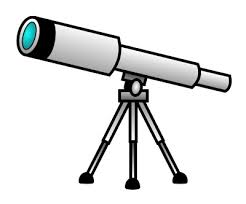 Covid-19 and the Financial Outlook

This is for your information only and you should always talk with your financial advisor before acting on it.

It has been provided by JBWere funds manager and advisor to Freemasons New Zealand.

It has now been around two and half months since the number of COVID-19 cases globally (excluding China) first exceeded 1,000 and clearly plenty has happened since then. Total confirmed virus cases now tops 3.5 million and many of the world’s governments have put in place lockdowns in some shape or form. Policymakers have ramped up an unparalleled level of policy stimulus in an attempt to support businesses and households through a period of economic ‘hibernation’. Developments in financial markets have been meaningful too. Not only has this period seen the fastest bear market in US history (equities falling 20% from their highs in the space of just 22 days), but also one of the most aggressive rallies in history (chart below). Since the S&P 500 troughed on 23 March, it has recovered by around 30%, to now be down only around 17% from its previous all-time highs.

Considering we are facing what is likely to be one of the largest shocks to economic activity in history, it is perhaps the latter observation around the recovery in equity markets that might come as the biggest surprise. Our inclination through this crisis has been that there was a strong possibility that the recovery in equity markets could be just as rapid as the initial weakness due to: 1) the nature of this shock (i.e. a true exogenous event rather than something necessarily wrong ‘inside’ an economy); 2) the speed at which the equity market sell-off occurred in the first instance; and 3) the amount of policy stimulus that has been provided. However, even we have been surprised by the speed and extent of the bounce in equity markets recently. 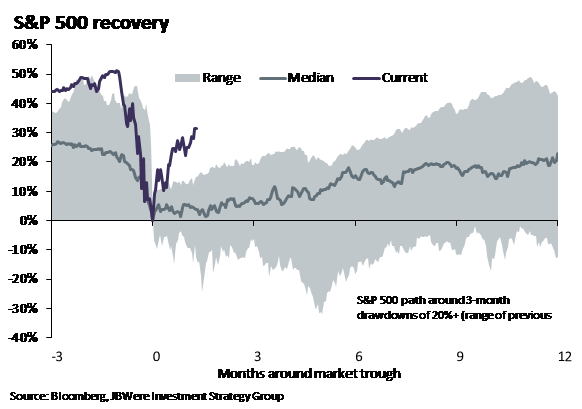 So why the bounce?

To us, there are three key reasons why markets have risen sharply. The first is the action by policymakers in potentially averting some of the most negative downside scenarios. Fiscal spending has been large and targeted, and on a scale that exceeds what was delivered during the Global Financial Crisis (the debate on “paying” for this spending can wait for another day). On top of monetary policy easing, central banks – especially the US Federal Reserve – have also introduced measures to ensure global credit markets continue to function smoothly. This action has meant that the risk of widespread insolvency from the collapse of business cashflows has been alleviated for now. The second factor is the virus itself. Compared to the middle of March, when new cases were rising sharply around the world, we have now seen a clear slowing in its spread as containment efforts have succeeded in ‘flattening the curve’. Positive news flow on effective treatments, vaccines and testing has also stepped up recently. This success is seeing authorities start to ease (or at least begin talking about easing) containment measures, which we believe is the third reason why markets have risen. Compared to a month ago, markets can now see scenarios where the source of the economic pain begins to dissipate.

Looking on the bright side

Of course, the news hasn’t been all positive. We are clearly learning how much economic and earnings damage has been caused. This is no better shown than by the initial jobless claims numbers out of the US (below), which over a six-week period now exceed 30 million. It is a similar message from the dramatic plunge in business activity surveys all over the world. Corporate earnings estimates are being slashed, with some analysts forecasting overall market earnings for the S&P 500 this year to be down 40% from 2019, and on par with what the average company earned back in 2012. 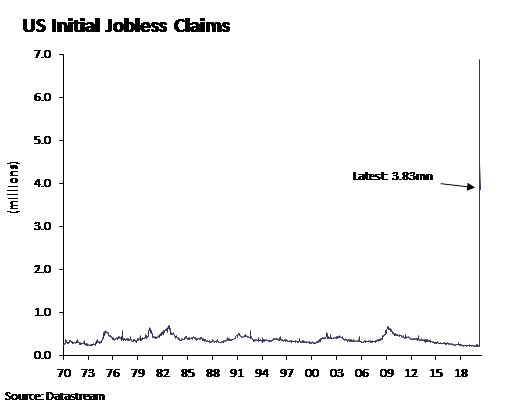 Yet it appears that investors are happy to look through this pain because there are now hints of recovery that weren’t evident a few weeks ago. Perhaps that is another element that sets this crisis apart from others. In contrast to the GFC, when at the time it was quite difficult to determine how and when it would end (because the source of the crisis was severe imbalances in the financial and real economy), this crisis has a definitive ending – it is when the virus goes away (either by itself or because there is a medical breakthrough). Of course, we don’t know when that will be, but because policymaker action has been aggressive (reducing near-term insolvency risk), investors seem comfortable not waiting around for the resolution to this medical problem because they know that it is a problem that will eventually be resolved.

Moving to a new phase

In this regard, we believe we are shifting into a new phase in the COVID-19 crisis, or at least a new phase in how we are interpreting financial markets. That is; assessing what type of recovery scenario markets have now priced and whether that is realistic or not. Right now, given where markets have risen to, we believe that markets are priced for a reasonably speedy recovery in economic activity and earnings over the next 12 to 18 months. 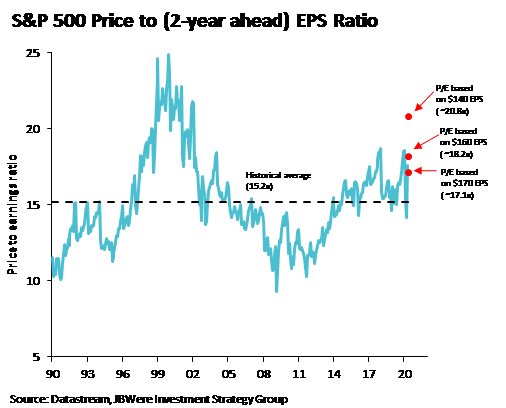 Now that doesn’t rule out that type of scenario occurring. In fact, we are hopeful. One way this could occur is if there is a medical breakthrough that provides authorities with the confidence that even if the virus is still present health systems will not be overwhelmed as containment measures are lifted. There is certainly no shortage of research currently going on by the global scientific community, and as mentioned there has been some positive news flow recently both around possible therapeutic treatments and the fast-tracking of a vaccine. At the last count, there were 197 treatments in consideration and 111 potential vaccine candidates being developed. It is possible that this ‘breakthrough’ (perhaps more than one) is only a few months away.

Yet the risks of setbacks until this medical solution is found is non-trivial, especially around the onset of second waves of the virus delaying the economic recovery as containment measures are reintroduced. Several epidemiologists believe there is a reasonable likelihood of this, and it would be a disappointing outcome for markets. A flare up in geopolitical tensions would also be disappointing for markets. For this reason, we expect equity market volatility to persist and are still advising caution on deploying new money into equities at present.

That said, our optimism towards equities over the medium term remains. We have confidence that a medical solution will eventually be found. Combine this with interest rates set to remain historically low for some time, and equities are likely to continue to offer attractive relative returns.