Explanation of our Coat of Arms – Freemasons New Zealand 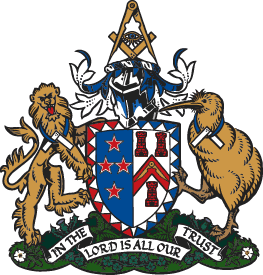 Explanation of our Coat of Arms

An explanation of the Armorial Bearings of the Grand Lodge of Antient, Free and Accepted Masons of New Zealand

Start with the shield. It’s divided into two vertically.

On the “Dexter” (right) side is a copy of the arms of the “Moderns Grand Lodge” (the first Grand Lodge of England) founded on 1717. This pays homage to the first Grand Lodge founded officially and recognises the descent of the Grand Lodge of New Zealand from the masonic bodies of the British Isles. Their arms are divided by a “chevron” (the inverted V) on which are placed an open pair of compasses, this representing the square and compasses, two of the Great Lights in Freemasonry. Three towers are placed about the chevron, two above and one below. In heraldry a tower is a symbol of a castle or building and therefore it is very suitable to express the trade of the operative stone-mason from which freemasonry takes so much of its imagery. Three is a significant number in Freemasonry-particularly in the first degree.

On the “Sinister” (left) side of the shield is the southern Cross which applies these arms specifically to New Zealand.

Around the shield is a “bordure” (border) which is indented (toothed), thus recalling the indented or tessellated border around the blazing star on the pavement of a lodge.

Now for the “supporters” of the arms. On the sinister side, the Lion of England and on the Dexter side, the Kiwi of New Zealand.   The Lion is on the sinister side of the shield containing the Southern Cross and the Kiwi on the dexter side which has a copy of the English arms.  This expresses the support these Grand Lodges owe to each other. Around the necks of both supporters is suspended a square, the master’s jewel.

Now for the formal crest (above the shield).  The style of helmet is that used for a civic or incorporated body, including a wreath of honour above which are the square and compasses in the same position they have in a lodge of master masons, and enclosing the all seeing eye – a symbol of the all- knowing power of the Great Architect of the Universe.

The motto is ‘In the Lord is all our Trust’ which speaks to the universality of Freemasonry.

This Coat of Arms was granted by the King of Arms, Royal College of Arms in 1984.